New Delhi: The Department of Science and Technology (DST) is playing a silent but crucial role in climate change research. At a time when the world is aghast how climatic changes are wrecking havoc, the DST supported research activities are bearing fruit and helping not just Indian scientific community but the world at large.

Researchers from various corners of India are tracing the impact of climate change, finding new ways to track the global problem, improving the projection of climate, its impact as well as vulnerability to prepare for the future.

As part of the National Action Plan on Climate Change (NAPCC), Department of Science & Technology has been entrusted with the responsibility of coordinating and implementing two national missions on climate change. These missions, the National Mission for Sustaining the Himalayan Ecosystem (NMSHE) and National Mission on Strategic Knowledge for Climate Change (NMSKCC), are being implemented through a cluster of programmes that are supporting climate change research as well as to strengthen capacity in the area and nurture future researchers in different parts of India.

Dehradun-based researchers have found that small-sized glaciers in Sikkim are melting at a higher magnitude as compared to other Himalayan regions in a study published in ‘Science’ conducted by the Wadia Institute of Himalayan Geology.

Researchers from the same institute have also found that black carbon from agricultural burning & forest fire has alerted over the years may influence melting of Gangotri Glacier.

A team of Scientists from IIT Kanpur has found that aerosols like black carbon and dust, which makes the Indo-Gangetic Plain one of the most polluted regions of the world, have led to increased incidents of high rainfall events in the foothills of the Himalayan Region.

In another work supported by DST, IISc researchers showed that a planetary wave from the North Atlantic is capable of derailing the Indian monsoon on which the Indian economy is heavily dependent.

Centres of excellence in Climate Change in four Indian Institute of Technologies – Delhi, Bombay, Kharagpur, and Madras, are working on improving climate projection models to make them more comprehensive and accurate.

The Centres of Excellence (CoEs) Centre for Climate Change, IIT Delhi, has contributed to significant improvements to the base model, moving towards development of the India Centric Climate Model (ICCM).

Connection between monsoon and irrigation practices has been established by DST Centre for Excellence in Climate Studies, IIT Bombay. They have underlined the need for representation of irrigation practices, farmer’s behavior, and vegetation- land and atmosphere interactions to improve model predictions and also develop agricultural vulnerability maps at the National level.

DST Centre for Excellence in Climate Change Impact on Coastal Infrastructure and the Adaptation strategies, IIT Madras is developing suitable climate change adaptation measures for coastal infrastructure and utilization of water resources. A technique is known as “pseudo global warming method” has been adapted and successfully used for prognostic understanding of how cyclones originating in the Bay of Bengal would behave in the near future (2025) and in far future (2075) under different RCP scenarios (a greenhouse gas concentration trajectory adopted by the Intergovernmental Panel on Climate Change). It is predicted that cyclone damage potential will increase significantly in future. This strategic knowledge is essential for all the studies related to adaptation of coastal infrastructure, water resources management in coastal areas and preparedness of coastal communities to extreme events in the future.

Historical climate data for the Indian Ocean region has been used by Center of Excellence (CoE)- IIT Kharagpur to understand the temporal variability of wave height (SWH) over the Bay of Bengal (BoB) region for the period 1997-2015, which have been reputed international and national journals.

The temperature thresholds for survival of vectors of major Vector-borne diseases (VBDs) have been studied by the DST-ICMR Centre of Excellence for Climate Change and Vector-borne Diseases, National Institute of Malaria Research to set up a system for early warning of outbreaks for malaria and dengue. The impact of temperature on development and survival of vector of dengue (Aedesaegypti), Malaria (An. stephensi, An. culicifacies) on immature stages like eggs, larvae, pupae, and adults was studied. The most preferred breeding habitats of Japanese Encephalitis vectors were also identified in Gorakhpur.

High-risk areas have been identified by the DST-ICRISAT Center of Excellence on Climate Change Research for Plant Protection (CoE-CCRPP) for mapping the spatial and temporal distribution of diseases and insect-pests under changing climate scenarios and study host–insect-pest/pathogens interactions in relation to simulated climate variables. This will help develop adaptation strategies to minimize crop losses and weather-based plant protection advisory tools for the timely management of diseases and insect pests.

State Climate Change Cells/Centres in the 12 Himalayan States are undertaking vulnerability assessment, training programmes, public awareness, and institutional capacity building in the area of Climate Change science, impacts, and adaptation. It led to the first-ever Pan-Himalayan vulnerability profile map covering the 12 IHR States developed under the common framework, which has been widely accepted by different stakeholders for climate adaptation planning in the IHR. It has also been extended to the rest of the Indian states using the Common Framework for rest of the Indian states, which identified eight eastern states to be the most vulnerable to climate change.

Building the next generation of climate experts

In order to build capacity in the area, over 1000 scientists, experts, and 200 institutions in the country trained research students to carry on the legacy of the work. International collaborations have helped enhance this capacity and helped in the exchange of expertise in the subject.

The Government of India and the Government of Switzerland established an Indo-Swiss Joint Committee for Scientific and Technological Cooperation. The Swiss Agency for Development and Cooperation (SDC), through its Indian Himalayan Climate Adaptation Programme (IHCAP) programme, has been working as a knowledge partner of DST in providing technical support for undertaking vulnerability and risk assessment, stakeholder training and public awareness programme to the 12 State CC Cells established under NMSHE. As part of this cooperation, a detailed district-wise vulnerability assessment has been carried out for all the 12 Himalayan States.

An Indo-US Fulbright- Kalam fellowship scheme was initiated during 2015-16. During 2016-17 to 2018-19, three batches of six fellows (3 each in Doctoral and postdoctoral students) were awarded the fellowships through Indo-US Fulbright-Kalam Fellowships in Climate Change for research in the subject in US universities.

The research studies and capacity building supported by the Department of Science and Technology has helped strengthen various aspects of climate change expertise in the country. 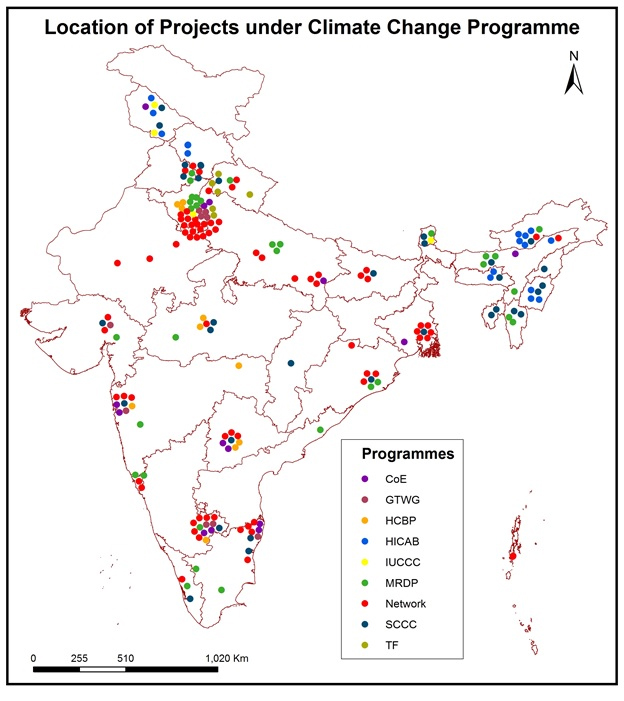 UP Government Goes for a Major Administrative Reshuffle

Assessing the Role of Technology in Physiotherapy

Yes, you read the title correctly, technology has and is being used in Physiotherapy as well. In this 21st century...

Customer Success – is it CRM?

Cloud computing has played an integral role in building of modern network architecture. With the advancement of emerging technologies such...

5 Ways in Which AI/ML is Transforming Insurance

Cloud Migration for Insurance Industry has Become an Immediate Necessity

Amit Gupta, Founder and CEO, Rapyder Cloud Solutions Apart from being a year of disruption, uncertainty...

Defence online OPD caters to over 10,000 patients in less than a month

Assessing the Role of Technology in Physiotherapy

“We Keep on Revamping Our Collaboration Solution.” Pramod Sharda, CEO at IceWarp, India and Middle East

No Result
View All Result